What to see in Budapest’s 9th District

24 Feb What to see in Budapest’s 9th District

Posted at 15:17h in Neighborhood guide by admin 0 Comments

Budapest’s IX’s district has the distinct advantage of being both seated along a section of the city’s beautiful Danube riverbank that’s in the shadow of Gellert Hill and Budapest’s own ‘Statue of Liberty’, and being a neighborhood which has, thus far, avoided extreme gentrification.

As a result, it’s a great place to spend the afternoon, both taking in the view from the river bank, and exploring the districts many charming backstreets and cosy bars and cafes.

Designed to look like a whale, beached on the riverbank, The Bálna building is a newly renovated gem in Budapest’s architectural crown. It’s home to several bars, restaurants and stores, but by far the best is Jónás Craft Beer House, which has a great array of local and carefully selected international craft beers and riverside terrace seating next to charming park – a great chillout spot.

You’ll find this street in most guide books – and for good reason, as it’s one of the city’s dining hot spots, the streets lined with local and international restaurants – including the Michelin-starred Costes – charming cafes and bars, at least one ice cream parlour and a boutique grocer.
While you’re there, make sure you check out the Szent Ferenc Plébánia Templom, a charming church surrounded by a pleasant green square – a veritable oasis from hustle and bustle of the street it sits off. 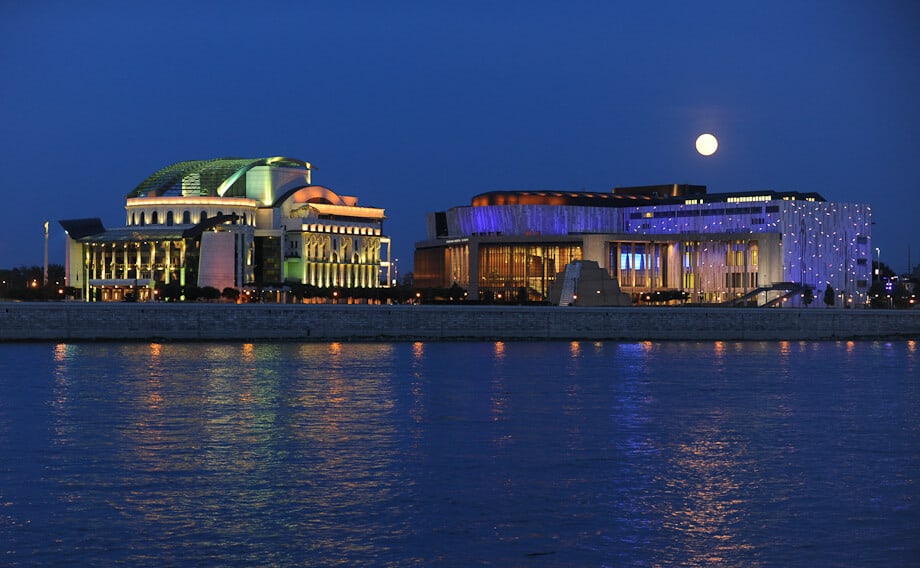 Located further up the river, near to Rákóczi Bridge, the grand National Theatre has been open since 2002, while the equally stunning Palace of Arts opened in 2005. Between them, they host a wide variety of shows including dance, chamber music, jazz, world and pop music performances as well.
Also located in the complex is the Béla Bartók National Concert Hall, a 1,700 seat, Gothic style performance space that’s been described as having some of the best acoustics in the world. Also worth a visit while you’re there is the Ludwig Museum – a contemporary arts space.

DOWNLOAD OUR FREE TOUR SNEAK PEEK THAT INCLUDES OUR 7 FAVORITE SPOTS IN THE JEWISH DISTRICT WITH PRACTICAL INFO & INSIDER TIPS FOR EACH LOCATION.

IX district has pushed to set itself apart from other districts when it comes to its hop-based offerings, and as a result, it has some of the best craft beer spots in the city – 20 bars to be exact according to their website, with 99 taps in a 2km area pumping out the golden liquid. So proud of their work are they, they they even held their own festival for the first time in April 2016. If you want to learn more about the Budapest craft beer scene, you can sign up for one of the Budapest craft beer tours.

Must-visits include Skanzenclub where you can legally smoke inside thanks to the fact that it’s actually a private club where you tap your own beer and pay a ‘suggested donation’, iF Jazz Café if you enjoy a smooth musical background to your beer drinking, and don’t miss Élesztő, the “heaven” of the craft beer lovers.