The hidden mini statues of Budapest 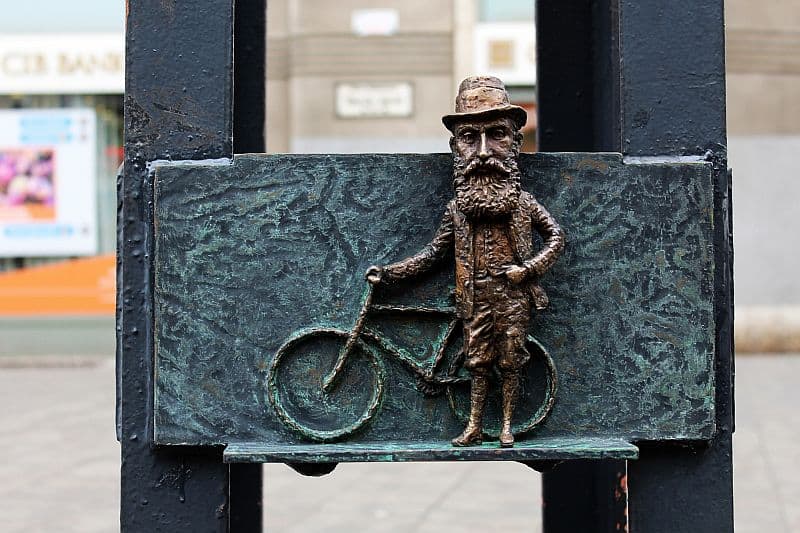 27 May The hidden mini statues of Budapest

Posted at 10:44h in Street art by admin 0 Comments

What do a murdered squirrel, a tiny tank and Hungarian puppet have in common? No, this isn’t some weird riddle; they are all the artistic antics of Mihály Kolodko, a guerilla-sculptor, a Ukranian citizen with Hungarian origins, who was born in the Transcarpathian city of Uzhhorod (Ungvár).

Like Pokemon, his mini statues keep popping up throughout the city, so be on the lookout for the next whimsical installations. We have no idea what Kolodko will think of next but we are excited to find out. In this article, we’re going to look at some of Mihály Kolodko’s prominent mini statues.

Below this article, you will find a comprehensive map indicating all these mini statues. 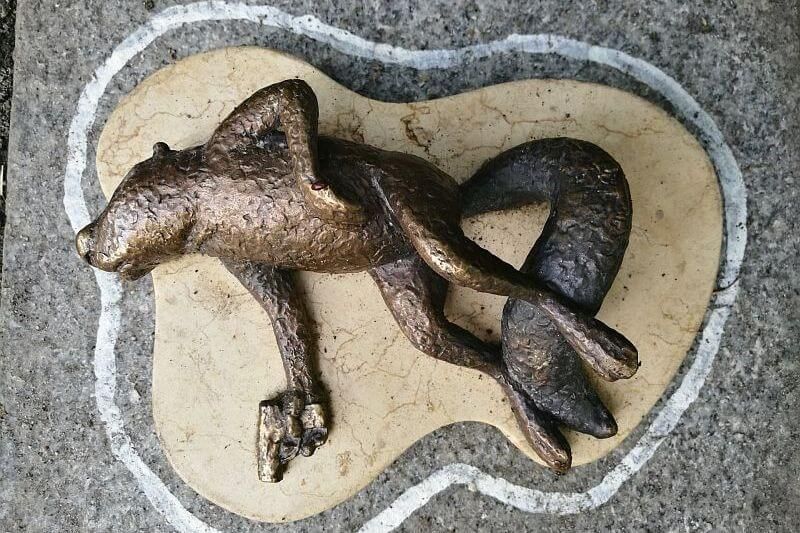 Wandering down beautiful tree-lined Falk Miksa Street you wouldn’t expect to come across a murdered squirrel, his body outlined by chalk and his hand clutching a gun.

We don’t exactly know what happened to the furry victim (was it a homicide or suicide? Is the perpetrator still at large?). Lucky enough for the squirrel he was murdered next to the Columbo statue so it’s a case that he’s sure to be able to crack. 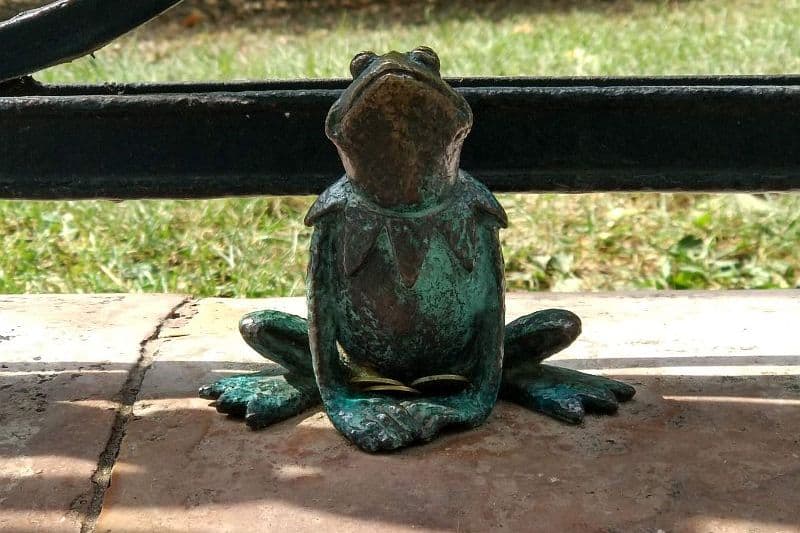 If you are wandering along Szabadság Square (Liberty Square) near Parliament you could very well miss Kermit the Frog if you don’t happen to look down. Nestled next to the fence overlooking the square’s café you’ll find this beloved Muppet.

While the statue was created to recognize when frog legs became a Hungarian delicacy in the late 19th century, don’t worry! Kermit is well-loved and not likely to be eaten. If you happen to see him during the winter months, you may find that someone has dressed him in a cozy little scarf (because it can get awfully cold in the snow). 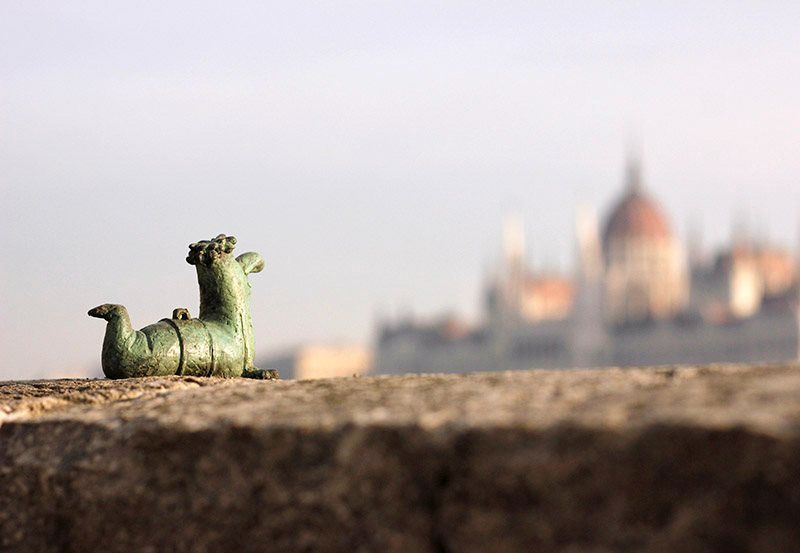 If you grew up in Hungary then you may remember the TV series, “A Nagy Ho-ho-ho Horgász” (“The Big Ho-Ho Angler”) about an oafish fisherman and his bait. It seems only fitting that Kolodko’s first miniature statue would be the show’s character Főkukac, a happy little worm who is no longer bait but instead leads a much better life sitting on the banks of the Danube at Bem Quay 15.

If you’re a fisherman you may want to stop and rub Főkukac’s nose for good luck (it certainly couldn’t hurt, right?). 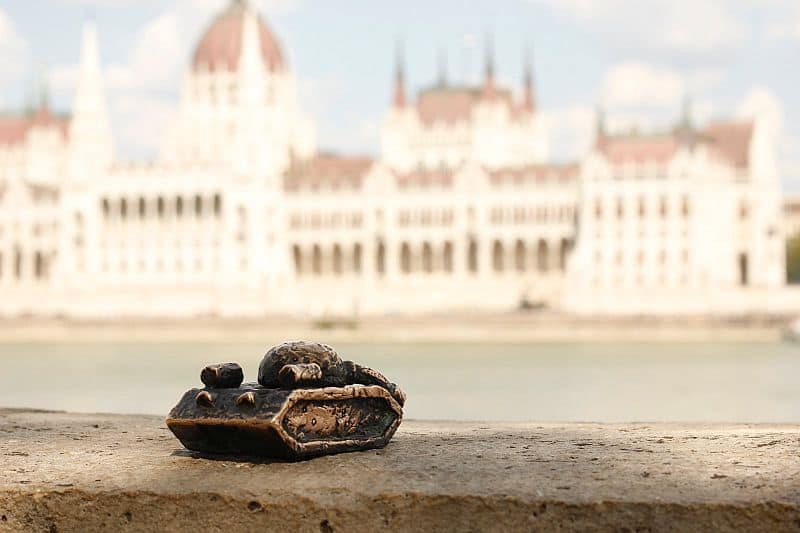 Many of Kolodko’s guerilla sculptures may be small but they offer a powerful message, including this mini tank, also found near the riverbank on Bem Quay.

This tank symbolizes Hungary’s 1956 revolution, as indicated by the bold white letting “Ruszkik Haza!” (“Russian’s go home!”) etched on the side of the tank. While the tank is facing Parliament its gun is facing downward to signify the end of the revolution. 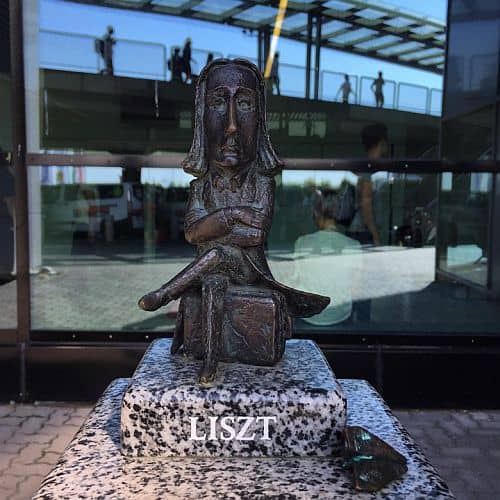 Ferenc Liszt, the world-famous Hungarian composer, may be gone but he’s certainly not forgotten. In 2011, on the day of Liszt’s 200th birthday, a miniature statue in his likeness was placed at the Terminal 2A bus stop outside the airport.

It’s a fitting place for the accomplished world traveller (who can be found sitting on his suitcase), seeing as the airport was named in his honour. 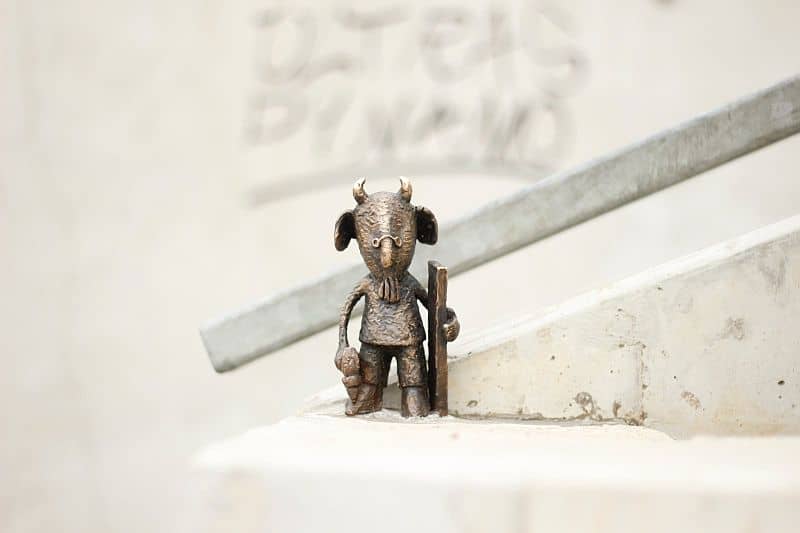 If you were watching Hungarian cartoons in the 70s then you might remember the loveable Mekk Elek, the handyman goat who was endearingly inept. While he tries his hand at many different skills, it seems that Mekk Elek isn’t really cut out for any of them.

Luckily, he is cut out to be an adorable mini statue at the foot of the stairs of Széll Kálmán Square near the Castle and luckily for all of us, he isn’t doing any repairs. 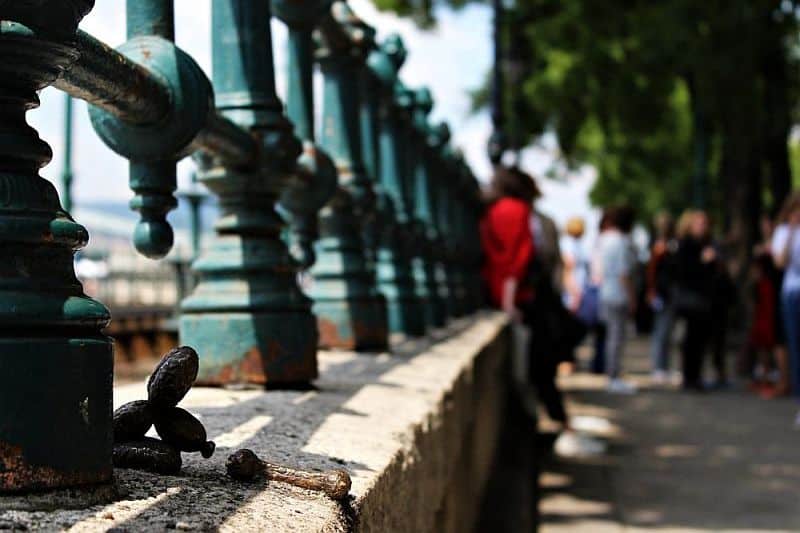 You’d have to be on the hunt for this mini statue at the Pest entrance of the Chain Bridge in order to find it. Placed between the iron fence posts near the Corso Restaurant lies Libido, a balloon dog and homage to the scandalous artist Jeff Koons who is also known for his balloon animals and inflatable sculptures.

Luckily, for this little guy, he’s not made from rubber so he can withstand the city’s elements and not fall prey to mischievous visitors.

Tivadar Herzl was a Jewish Austrian-Hungarian journalist, writer and political activist who became known as the father of modern Zionism. 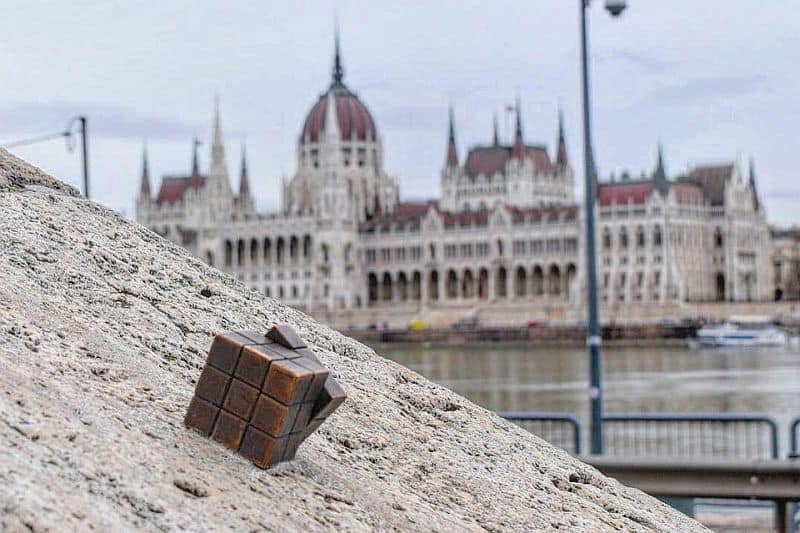 Did you know that this popular puzzle toy is a Hungarian invention? So it should come as no surprise that Kolodko wanted to commemorate the Rubik’s Cube by making it into a miniature statue.

While you won’t be able to solve this puzzle you can enjoy its clever craftsmanship by heading to the Buda riverbank near Batthyány Square where you’ll find it opposite Parliament. 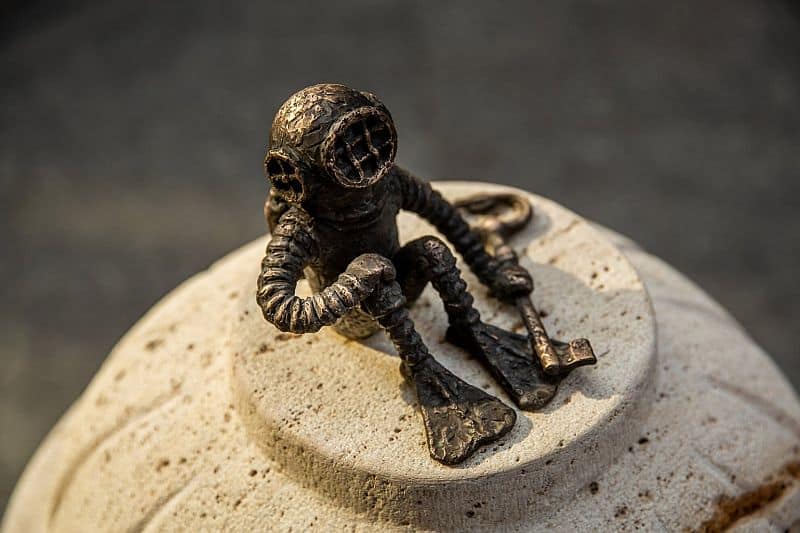 If you’re headed to the famous New York Café you’ll find the “key” to the café resting in the hands of a diver at the intersection of Dohány Street and Osvát Street. Legend has it that the Hungarian author Ferenc Molnár tossed the café’s key into the river to prevent it from ever closing.

Perhaps Molnár’s outburst worked, as the café is still just as popular today as it was at the turn of the 20th century. 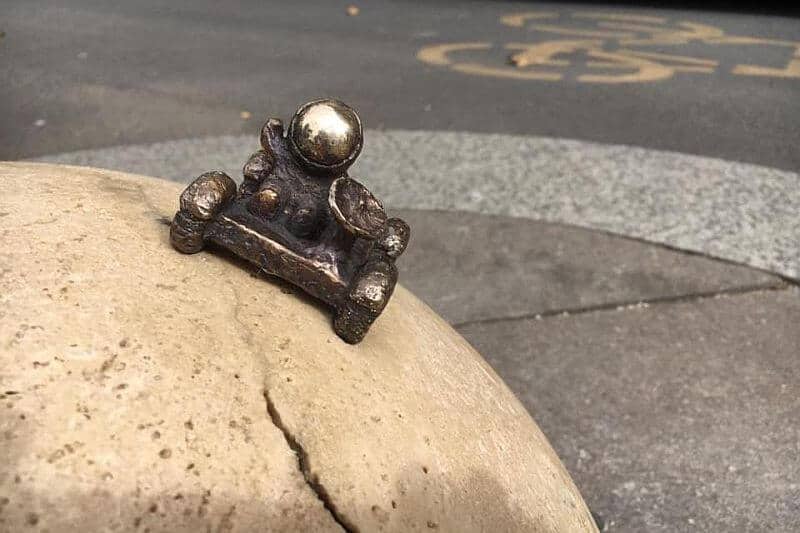 Being a nation of inventors, it’s never a surprise that a Hungarian turns out to be behind an innovative new piece of technology. Ferenc Pavlics escaped to the US after the 1956 Revolution and ended up working for NASA.

It was he who came up with the lightweight but resilient wheels needed to traverse the Moon on the Lunar Rover. Pavlics was given a NASA award for his achievement. Appropriately, this one can be found on Hold (Moon in English) street on its own moon-shaped bollard. 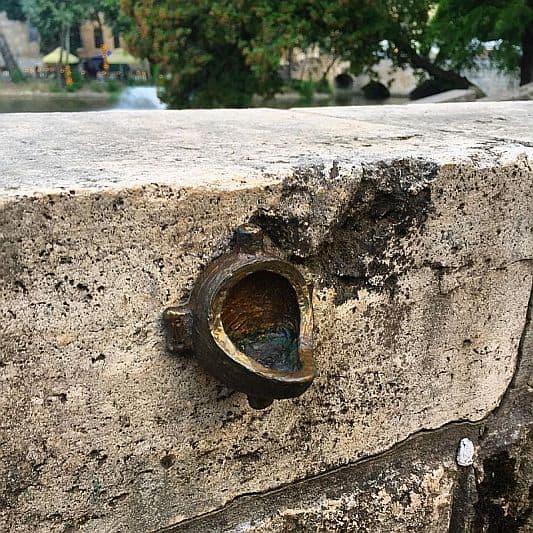 One of Kolodko’s oldest (and easiest to miss) works. This one is tucked away on the wall surrounding Vajdahunyad Castle moat.

A tribute to Marcel Duchamp’s controversial 1917 sculpture, Fountain (itself a signed porcelain urinal), we’re left guessing at the Kolodko’s intentions. Is he alluding to the lack of public toilets in the area? Or is he literally just taking the piss? 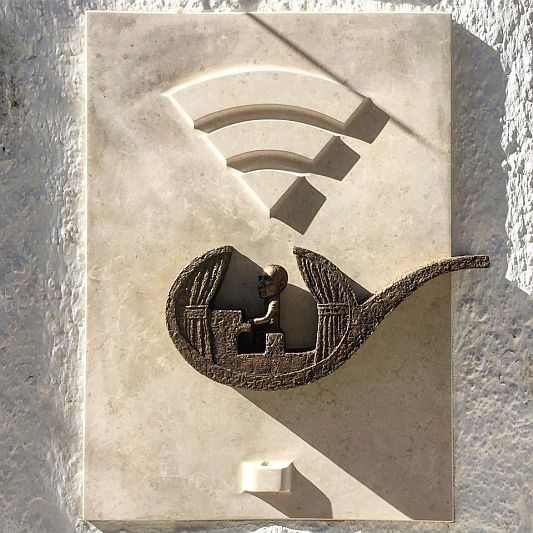 Gloomy Sunday, bleakly and infamously known as the Hungarian Suicide song due to the supposed influence it had on suicide rates in the ‘30s, was the work of Rezső Seress, who lived and worked in the Kispipa bar in District VII. A survivor of WWII labour camps and a former trapeze artist, Seress focused on songwriting after an injury.

He could have collected a fortune in royalties for the song in the US, but instead stayed in the bohemian bar, writing, playing the piano and singing for the clientele. Years of depression followed and, after surviving a suicide attempt from the upstairs window. This tribute to his talents is on the wall of the former Kispipa restaurant. 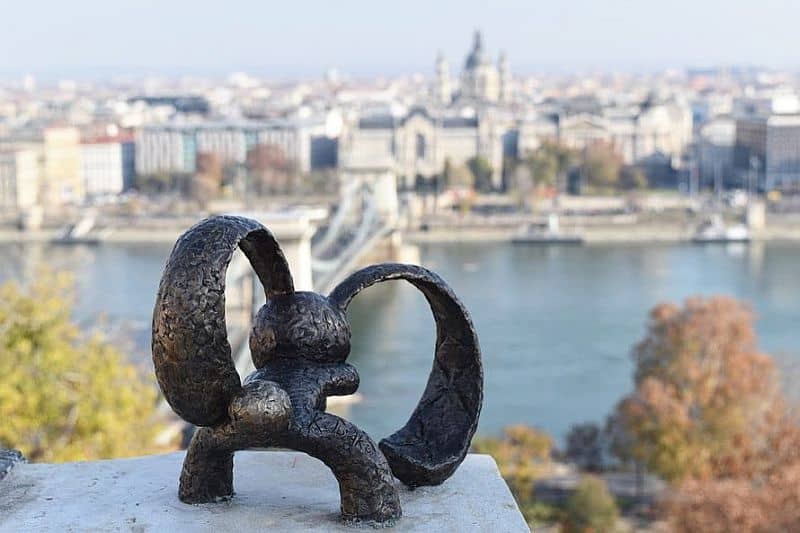 Written in the 1970s by Veronika Marék and animated by Zsolt Richly, the show gained belated popularity around the world, especially in the US where it was shown on Nickelodeon after the fall of the Communist regime.

This floppy-eared bunny has a bird’s-eye view of the city, surveying the Danube through her telescope. 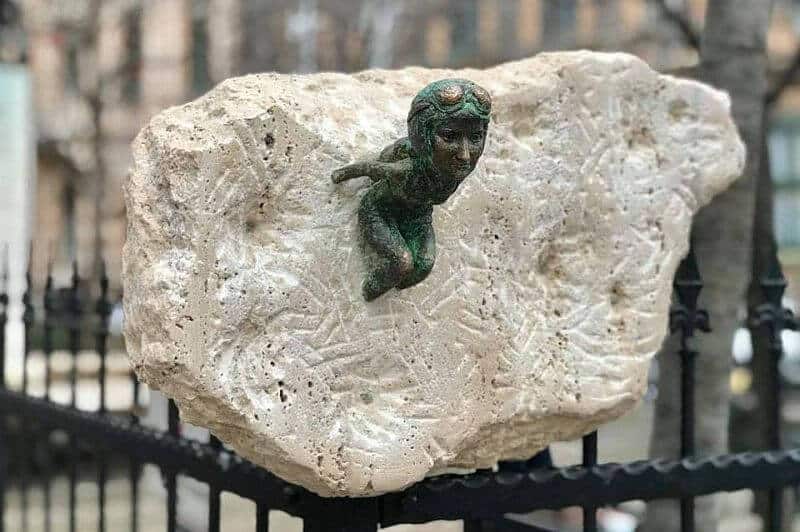 Despite being safely away from the Holocaust (living in the British Mandate of Palestine), she enlisted in the British Women’s Auxiliary Airforce to work with partisans disrupting Nazi activity and preventing deportations to concentration camps.

Parachuting safely into Yugoslavia, Szenes learned that Hungary was now Nazi-occupied. Nevertheless, she continued onwards towards the border, where she was arrested by Hungarian guards, before being imprisoned, brutally tortured and executed. She had refused to reveal the information her captors sought.

This tribute to an incredibly brave woman is also part of the #wonderwomenbudapest initiative which aims to rebalance the gender divide in the city’s sculptures. 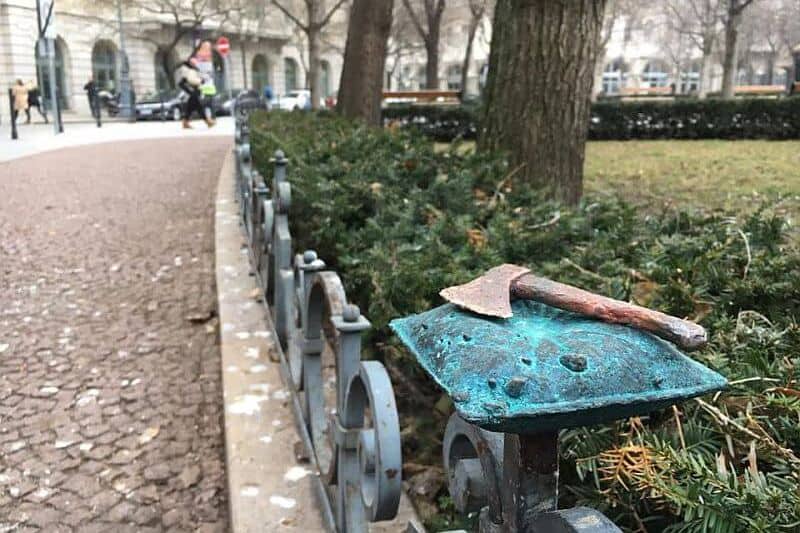 Liberty Square has long been an ideological battleground, with controversial monuments from every political era of Hungary’s history standing shoulder to shoulder and Kolodko audaciously entered the fray in 2019 with his Ushanka (Russian Hat) mini-statue, criticising a perceived continuing Russian influence in Hungarian politics.

Unfortunately, one far-right politician didn’t take too kindly to it, destroying the statue with an axe and throwing it into the Danube. The sculptor responded with this sardonic comeback, both mocking and memorialising the violence of his aggressor. 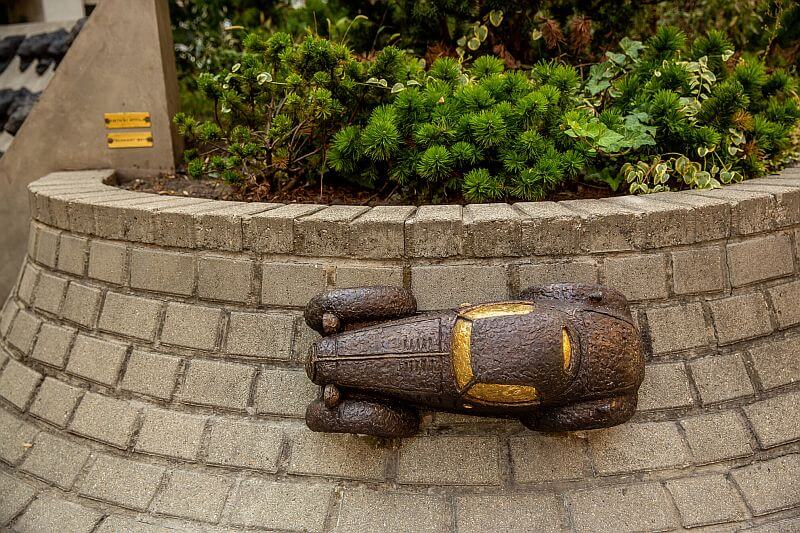 Amongst his seemingly innocuous sculptures of children’s stories and old TV shows, Mihály Kolodko has shown an inclination for celebrating the Jewish history of District VII.

As well as his pieces on Hannah Szenes and Rezső Seress, there’s also this ritzy memorial to the work of writer Jenő Rejtő, another Jewish resident who wrote fantastical, breakneck-paced pulp fictions stories. The 14-Carat Roadster is one of his most famous tales and can be found right in front of the Pesti Magyar Színház. 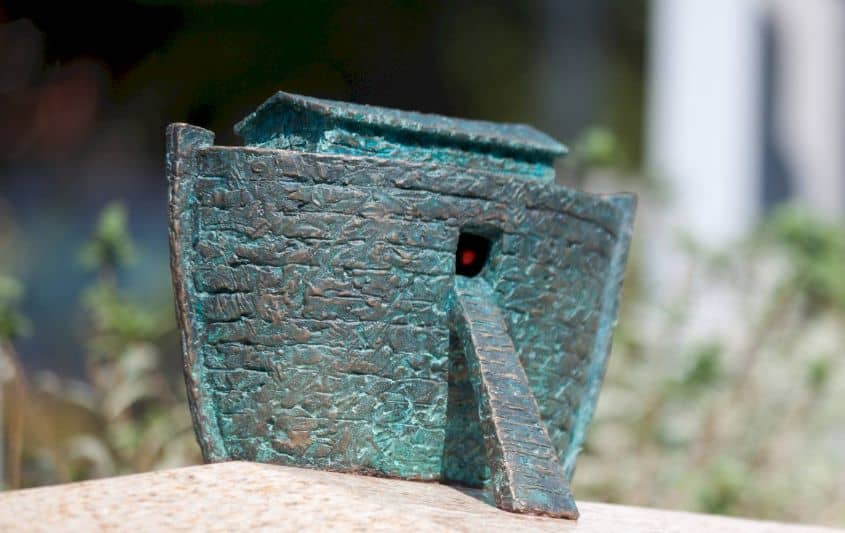 It’s worth finding the precise time of day to see this Ark, waiting until the sun hits just the right spot. If you do, you’ll be rewarded with the rainbow that symbolised the end of the flood, recreated in its beautiful multicoloured windows.

This was unveiled (along with the Roadster and Diver) in August 2019 and marked a period when Kolodko’s mini-sculptures started getting a little fewer …mini. 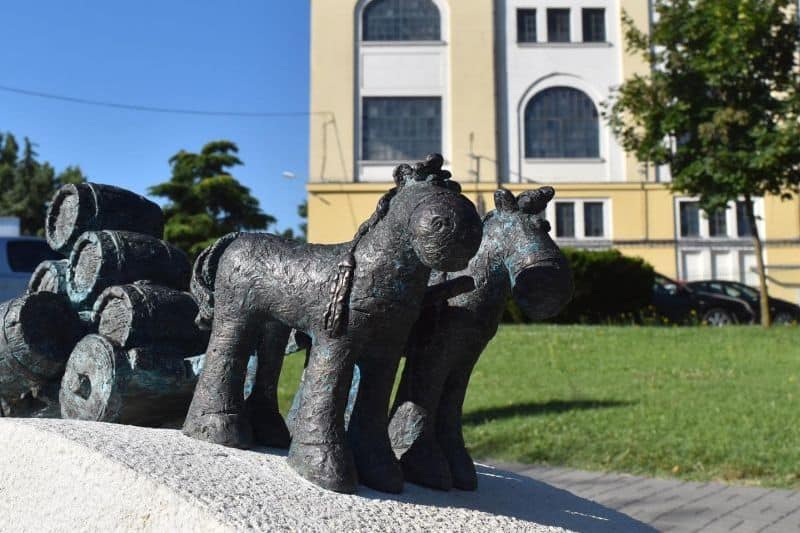 It may be a little detour from the city centre, but the 160-year-old Dreher Brewery in Kőbánya is worth a visit, especially now that is boasts not one but two new Kolodko works. On the gate you can see a pair of dray horses pulling barrels of the good stuff, but venture inside and you’ll see the man himself: Antal Dreher Sr.

Dreher was an Austrian who revolutionised the beer-making process with his new bottom-fermented Lagerbier, which won Gold Medals in Paris, Vienna, and even far off in Sydney. By the time of his unexpected death in 1863, he’d bought the Kőbányá Brewing Company, sowing the seeds for Hungary’s best known beer.

Dreher maintain a Beer Museum at their 10th District works, so you can learn all about the process yourselves – as well as seeing Kolodko’s latest nod to Budapest history.

Pin this for later 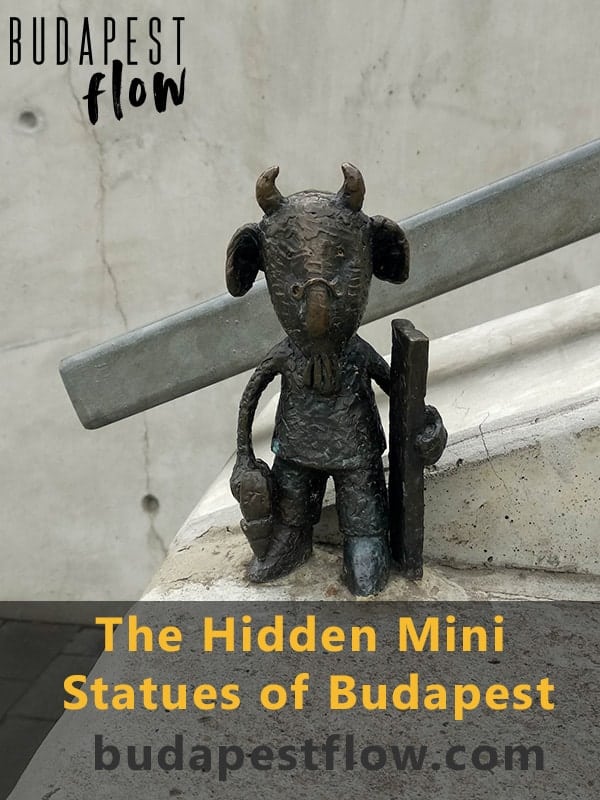 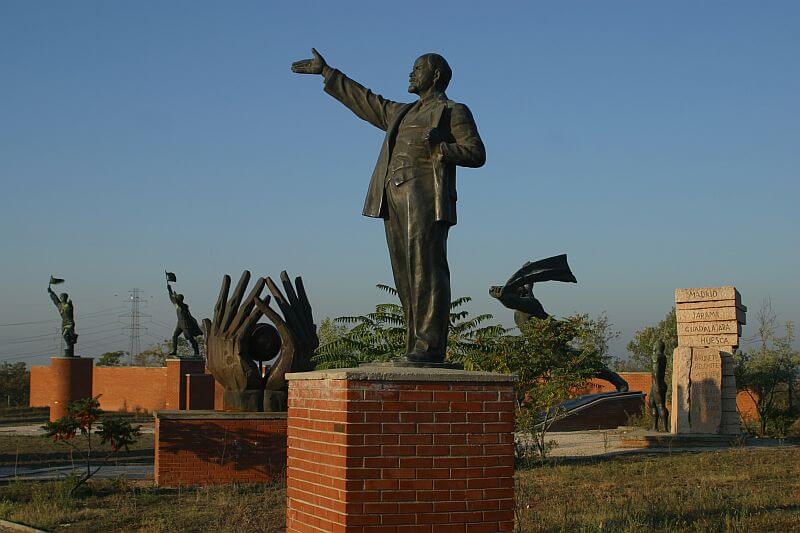 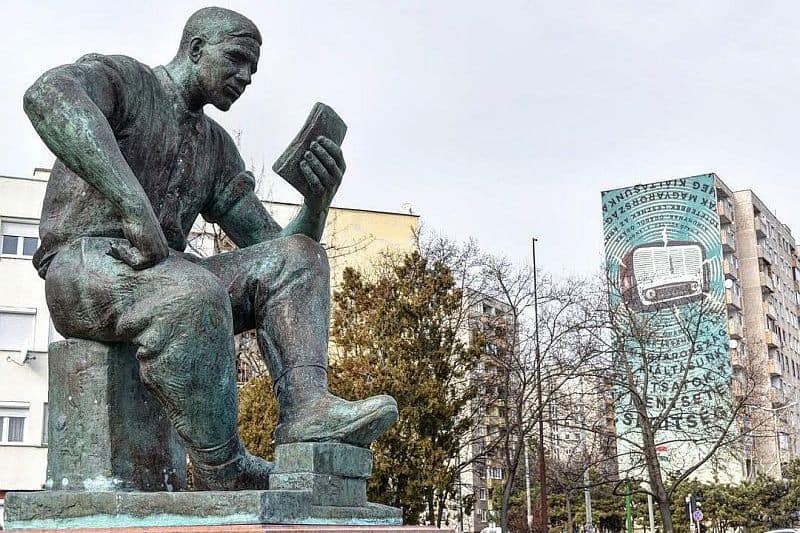